“Are you sure you know what you’re doing?”

Wind whistles through her hair. Her knuckles turn white on the edge.

colorful fruitlets in the bowl of green.

“Totally,” he says with a final tug on the gas-powered torch.

The bull’s eye balloon ascends through a cloud,

She stands in the middle to avoid looking directly down.

Outward and beyond is extravagant enough.

“Beautiful,” she murmurs. Caught in the moment, she leans forward and looks down.

Her stomach free falls as she focuses on something much closer to her.

But then her stomach proceeds to do back-flips.

He is kneeling, holding a ring, proclaiming things, all while maintaining a smile.

She steadies herself before she bellows, “Yes!”

Her fist grips the ring. They wrap around each other and stare out at the sunset,

the symbol for their future, while literally riding a mile high wave of euphoria.

“You had to choose this balloon.”  On the outside of the balloon,

the words “Just Kidding” circled their heads. He shrugs.

“A joke surprise for a serious surprise.”  Pop goes the cork to the first

bottle of champagne, then the second. As they sink into the basket,

they sink into the bottle of brandy they had snuck with them.

Her head pokes up to look around for the source of the noise. 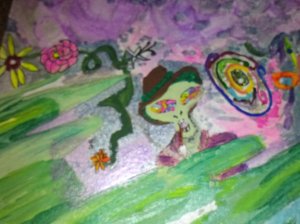 A green alien, costumed in its best Raoul Duke attire [complete with stoned out eyes and cheap, twitching cigarette holder], dangles from a vine of extraterrestrial flowers.

It disappears into the sky before she can get a better look.

“Nothing Cherie, come back down here.”

Dominating the view is the solid, steel side of one of the smoking pipes

connected to the factory nestled in the valley they currently hover over.

“Rick! Do something! Quick!”

He sits up with a grin.
Slowly his mind processes what she said and what his eyes confirm. Next he rattles the carriage, exposes his Flash boxers, and he pulls the cords that make them rise just in time.

Narrowly, they miss their demise.

They return to their misty gaze over the world while wondering,

Up above, in the outer bands of the atmosphere, their alien savior returns

to the viewing deck. “Did I miss anything?”

“No, they’re having sex again. You know you weren’t supposed to save them.”

“Yeah, but they’re better than what’s on television.”

Wherever we’re going in this crazy Life of ours,
please promise me you’ll carry me through with you
because I always carry you with me.

Happy birthday to you!
We miss your blue eyes
And cheeky smile
Music isn’t the same
And nobody cares the way you did
I hope you found Peace
As nobody really listened to your truth
Or perhaps you’ve reincarnated and some new you is walking around or crawling,
to one day be worthy of your message, but
They will still never really be you, who we love and cherish and
who was taken from us all for horrifying nothing.
Thank you for the inspiration, i’ll jam out to your music all day.
To John,  the world sends its love.
Happy birthday!
–originally published on my tumblr page

It is a link to an amazing online literary journal called Fiction Fix !!!!

It is produced by alumni of UNF, University of North Florida, and I just began reading for the journal!!!

Super excited and hope everyone with check them out and submit their writing!!!!!

may be produced by the alumni,

But EVERYONE can submit to be read and possibly published! Yes you!

Either follow the link connected to the words Fiction Fix above, or copy and paste:

into a new tab and pursue the website and past journals!!

Also, if on my page, have the menu linking directly to Fiction Fix, so many ways you just have to choose.

along with the beginning of a new short story.

to jump-start the future.

Critiques of how to fix up some stories.

yet some I haven’t managed to put forth.

Another day, another chance,

another line I want to manipulate.

But that’s just me, I guess,

Though sometimes I wish I were

Didn’t have the need to express in words the things

I feel need to be said.

To go with the flow today,

Basically, a little less than a year until I graduate from college and can finally apply to those jobs that require a Bachelor degree.

But where to next? That is the big question.

Most people assume when I say that my major is English that I want to teach,

and that is not exactly the case.

I’ve thought about teaching, briefly, but it feels for me as a career for when I’m older and my kids (if/when I have any) would be older as well. I would have to teach at least 11th grade English, and follow the formula my 11th grade teacher made us do. Read, make the arguments to him, he’d argue the other sides, and made sure we wrote a lot. Only English class I had that prepared me for college. Well, my senior English teacher did tell me to always follow the professor’s format for papers, but that is pure stylistic choice. (And the only way you’ll pass any college course.)

Mostly, I want to edit. Books, articles, I’m hesitant about newspapers, but copy-editing is copy editing. Book editing I’m most excited about because I love to follow an author through that process of defining, then redefining, and then molding the plot together into the characters and have situations be curious and attention grabbing. I’ve been working on short stories, I’m three chapters into a novel, with a couple other novels in the beginning stages, and, as WordPress and those of you who read here know best, I have a penchant for off-kilter poetry at times. Rant about a subject, argument, bring in examples from stories, and possible ways to make the story more striking to the reader, to pull the eyes through the tale even when they know they should be asleep but aren’t so when they do wake for the morning and go to work they feel like weights are dragging down their face–but even so people read because they cannot stop reading the tale that captivates, inspires, and fulfills a need to experience what you yourself have not actually gone through, except as a passenger by vision(or hearing or touch, depending on how you have access to stories) alone. That is the most amazing thing of stories. Simple words alined to bring new worlds or perspectives to anyone who pays attention enough to get anything out of it.

I’ve loved books since I was 3 years old. I need to be around them. As Mom said to me recently, “You seem lost when you don’t have a book to read at the moment.” Because when I’m not actually reading, but in the middle, that’s where my head is still at. Same goes when I’m in the middle of writing a story. Which is always. As I am improving, expanding, writing long stories, and still trying to condense two different ideas I have into some flash fiction to get my words out there and to pave the way for some novels.

That’s my peace, there is what I want my life to consist of, but with the vaguest way into it, and a long year to make the journey seem like it’s undergoing instead of still a daydream spilled out into a post of another unknown writer trying to bust her way into the business.

Thanks for reading, if you made it through. Advice, criticism, random bursts of thought, feeling, or lecture is always accepted in one way or another.

spend too much money I do not have.

your toes and nails should be pretty.

then stand through the “I do”‘s.

Pictures of the party–

then I really must dash.

to my love and dog,

Can I just skip to Saturday night?

the rain is the back beat,

your vocals the dominating sound

over my keyboard alternating between rapid clatter and hesitant reproach.

a jingle of metal, from the dog running around, is as cheerful as any triangle could be.

as this poem rattles on.
these words aren’t as calculated as the timing you are using for the lyrics.

the creativity is flowing,

all throughout this room.

from your desk to mine.

television shut off between us (to keep out the invading influence).

the wall between striped blue and white.

the energy is contained,

each in our own little worlds of creativity,

but together in the sphere of the creative.

we enjoy each others company and thought stream.

as you have always said I can argue through a brick wall and your as stubborn as solid stone,

love endures and we see the cares we take for each other.

You know I’m a writer; I type away into the night, paint the stories I see in my head, and edit away at things that have already been written.

I know you are a hardworking construction type; early rise, early asleep, unless something special is occurring, and always awake again to help the ones you love.

You work hard; I find you so sexy due to your strength, intelligence, and so much more.

You love that I’m creative, respect that I have night hour ways, and can’t wait to read by books.

so excuse me if I can’t help but rewind,

and finish this as I began;

creative writing excercise, even if i probably don't have a fan base, poetry, read, sorry haven't written in a while, writing

Warmth rising from the oven,

in waves of deliciousness that consumes

and makes the air savory.

Oh, and then the remembrance of the cheesy rice

and baked tomatoes that are to accompany

And lets not forget

after the dishes, of course.

Such a lovely dinner, for two.

Part of one of Claude Monet's Water-lilies paintings.